She was purchased by her current owner in 2007 and shipped to the US where she was given a complete refit including all new systems, spars, rigging, hydraulics, winches and deck hardware.  The deck and cockpits were extensively modified to take advantage of the latest Class Rule and to maximize the efficiency of the larger crew size allowed for the Modern Division.  The layout features an extension of the grinding cockpit forward to include an area for the halyard pit.  The circular vang track was eliminated in favor of a spectra strop vang.  A companionway providing fast and easy access to down below was fitted to the front of the cockpit.  The pit area features a single halyard winch with separate topping lift and foreguy winches.  The deck was further modified to eliminate the aft end of the pole trough and to fit special sail handling hatches port and starboard.

VICTORY ‘83 is as close as the Class has come to a new boat in the past 25 years and is now one of the premier boats in the Class.  She has the only deck layout specifically designed to the current rule and the way the boats are raced today.  She was the first Super Twelve and she has enjoyed considerable success in the Modern Division since her re-launching in September 2008.

The “pit” – now part of the cockpit 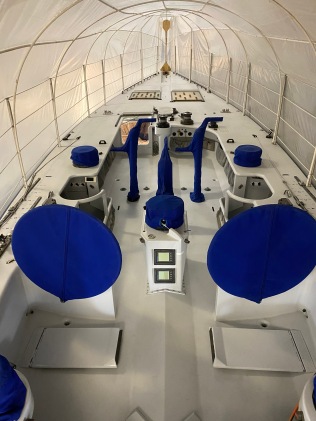 The open cockpit that is easy to work