Victory ’83 competed in numerous Twelve Metre events in the Mediterranean Fleet in the late 80’s and 90’s.  By the early 2000’s she had become inactive and it was ashore in the south of France where she was found looking long in the tooth and a bit tired.  Widely considered one of the fastest conventional twelves, she was in the words of Ian Howlett, “Shockingly Original”.  The 2001 Jubilee had brought a resurgence in the Class and she was a prime candidate for updating.  Enter the current owner and project manager who were looking for a Twelve to restore.  The match was made and she headed to the States for an extensive refit.  Compare her original deck layout to her new one! 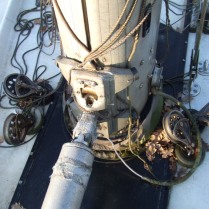